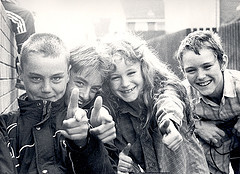 Guns don't kill people, bullets kill people. But bullets need guns to fire them and people to pull the triggers, so it's a bit of a joint effort all round. The technicalities of death aside, one thing we can probably all agree on, and speak up now if you don't, is that we don't need guns on the streets. Of any kind. We'd rather not even have them in the hands of the police but that's another story.

According to the press, we seem to be living in a city of fear, London descending into a pre-Dickensian nightmare of lawlessness. We're terrorized by a youth gone wild, armed to the teeth with weapons both real and fake, leaving no form of public transport sacred, no badly lit street safe. We've reached the point where even our politicians won't walk the streets alone. Something must be done!

The Met reckon about half the firearms on London streets are imitations, but often no less dangerous than the real thing (they look real, and many can be converted to be real), and it is these being targeted in their latest arms amnesty. The scheme, aimed at 10 to 25 year olds (you've gotta love the idea of a 10 year old with a gun, has a certain frontier feel to it), gives them a month to turn in any replica weapons they have.

The police will also increase checks on stores legally selling replica weapons, ensuring they meet new more stringent legislation. One of these changes is that now, unlawfully carrying a replica weapon in a public place carries a 12 month rather than 6 month sentence. Which must be a terrifying deterrent for any wannabe gangsta. We suppose getting this woman to deal with offenders instead is out of the question. Still, it's not like us to be in agreement with Sir Ian Blair but in this case, as the statistics for youth on youth gun crime continue to rise, we can't disagree that: every gun handed in is one less that can be used for violence and intimidation. Even if it is somewhat stating the bloody obvious.

As to the success of the amnesty, only time will tell.