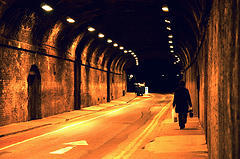 You wouldn’t think Jacqui Smith scares easily. In her time as Home Secretary she’s dealt with car bombs and blazing jeeps, and she’s lately been facing down a bunch of mightily annoyed cops. But in an interview appearing today in the Sunday Times, Jacqui revealed that she wouldn’t dare walk down a London street alone at night.

Would she feel safe walking alone at night in, say, Hackney, east London? She looks alarmed: “No. Why would I do that?”

Perhaps deprived Hackney is an unfair example – what about well-heeled Kensington and Chelsea? “No. But I would never have done, at any point in my life. I just don’t think it’s a thing that people do. I wouldn’t walk around at midnight. I’m fortunate that I don’t have to do so.”

OK, London by night can be intimidating, especially if you’re not so familiar with the area you’re in. But making out that the entire city is a no-go zone after dark seems pretty alarmist, and a little bit out of touch. One of the Home Secretary’s aides seemed to sense this, and apparently rang the newspaper to assure them Jacqui hasn’t completely battened down the hatches – why, just the other day she bought a kebab in Peckham after dark.

Whilst her brief (but hopefully delicious) foray into South London nightlife doesn’t really amount to a show of confidence in the city’s streets, maybe it could be the start of a more useful effort. The Home Secretary could tour the capital after dark, enjoying a takeaway in each location. Chips in Bethnal Green one night, a curry in Kennington the next. That way she’d be more comfortable with London’s neighbourhoods, and – bonus! – unbeatable when her mates want to know where to go after the pub.