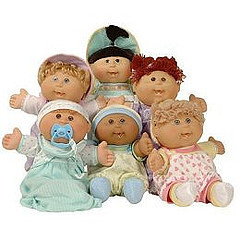 Lasers, screens, explosions, giant mutant zombie mummies (hmm, we may have inadvertently made a cruel pun there), apparently the latest gig gizmo is to parade your offspring, as opposed to The Offspring, which in this case might actually have been better. Brooklyn, Romeo, and Cruz Posh, Baby Beau, Barbabelle, and Scary Phoenix and Angel Scary Murphy all joined their famous Mums onstage at the O2 this week, during the track Mama. Surely these people can afford a babysitter. Only Ginger Bluebell was missing due to a bout of the chickenpox. Get well soon young lady.

All the sprogs were kitted out with protective earwear, although they can't have worked too well since the New Zealand Herald reports: at one point Brooklyn Beckham even covered up his ears as his mum was singing next to him. Posh's role in the show has been subject to some controversy, although the audience screamed the loudest whenever Victoria Beckham sang a solo line. Now that has to be as good an argument as any for realising a 28 Days Later scenario upon Greenwich.

But is parading your child on stage to 20 000 screaming fans a good thing? Is this the ultimate low in family accessorising and a new nadir in the depths to which we'll plumb to put our (sons and) daughters on the stage, Mrs Worthington? Wouldn't it be fair to let these children wait a little longer before finding out that their mothers are Spice Girls? Perhaps we'll have Sporty getting knocked up on stage next by Howard Donald, and giving birth live on the 2nd Westlife Christmas reunion special. It's only going to lead to tragedy. If the rumours of Michael Jackson touring next year are true, he'll likely injure his own by holding them up to the crowd and watching them crash into the pit as his arms drop off.