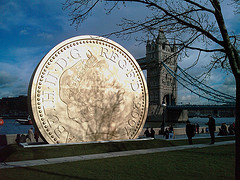 As Londoners we pootle around our fair city doing Londonish things: pretending to read anything off the Orange shortlist, pretending not to read the free newspapers, pretending not to notice how bad the man sitting next to us on the bus smells, rush-rush-rush with our minds usually elsewhere. And then once in a while we focus and spot something unusual, something that hasn’t happened before, or that wasn’t there yesterday.

Thus it is with spaces such as Potters Fields. Hundreds of us pass it on a daily or weekly basis, but it usually takes several passes before we actually notice that there is a 35ft man swimming through the grass, or even a 25ft high pound coin next to the river. Well, it is this latter that got our attention this week. It is apparently the right size to hold 50 million single pound coins (but Londonist suspects that it is probably filled with kapok and old stockings instead).

Anyway, the big coin has been put there to draw attention to The People’s £50 million giveaway – put simply, this is lottery money that we get to decide how to spend. It all ties in with a series of broadcasts on ITV this weekend.

Londonist has never claimed to be impartial, and so if we may we would like to tell you which way to vote (to save you all the hassle of researching it all yourself of course). We reckon that you should go for Sustrans’Connect2, which is a very strange name for an ambitious project designed to develop cycle and walkways all over Britain, including at least 8 in London.

So now you know.