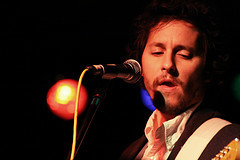 Josh Rouse might not be a well-known name, but he fills the Shepherd’s Bush Empire with ease tonight. In fact everything seems to come naturally to him, from the relaxed shuffle onstage to his casually turned-out country-pop gems.

Opening the bill is Sweden’s Jens Lekman, playing a solo set except for a girl who joins to play bongos and occasional piano. Lekman’s bittersweet tales of small-town romance sparkle with lo-fi pop hooks mixed with 50s calypso rhythms. His heart-on-sleeve romanticism and fey mannerisms are an acquired taste so the crowd don’t respond enthusiastically, but with final song ‘Friday Night at the Drive-in Bingo’ morphing into Chairmen of the Board’s ‘Give Me Just a Little More Time’, Jens and percussionist clapping along with the front row, he ends on a high-note.

Rouse and band take to the stage to the strains of Sharon Jones and the Dap-Kings, which seems to be impossibly funky for him to try to live up to. Actually, though, Rouse's sound is rooted in his soulful vocals, feel-good vibes and 70s West Coast sheen. The opening trio of ‘1972’, ‘Sweetie’ and ‘It’s the Night Time’ see him on acoustic guitar rather than electric, giving the tunes an organic, pastoral feel.

While there’s no faulting the songs and Rouse is on top form tonight, it would’ve been nice to see just a little imperfection, a chink in the armour that reveals some more of the man himself. But he’s no doubt keen to let the songs speak for themselves, and beyond the gloss of production there are depths to these tales of relationships gone south.

A change of pace comes in the encore with Rouse’s solo ‘Winter in the Hamptons’ before the band return. Set-closer ‘Sad Eyes’ is as near to a slow-burner as he comes, and it closes the set in typical fashion, the melancholic tale of a lover mourning lost years giving way to soaring vocals and an upbeat twist to the closing bars. A satisfying night out with the steady-rollin’ Mr Rouse.