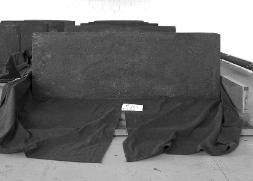 Damien Hirst has made the Tate's Christmas by gifting them 4 of his art works. The infamous cow and calf bisected and suspended in formaldehyde, "Mother and Child Divided" is the Turner Prize winning crowning glory.

This is a high profile donation, timed for maximum festivity and goodwill but Hirst's generosity is not spontaneous or even his own idea. He pledged works to the Tate back in 2004 as part of the Building the Tate Collection campaign which will also secure pieces by Gilbert & George, Louise Bourgeois, David Hockney and Rachel Whiteread, among others, in time. Respect to him, though, Hirst has pledged to donate up to 30 works in total which will be invaluable to the Tate at a time when the art market frequently punts stuff for millions and squillions of pounds.

From Brit art to shit art. 21 Anthropometric Slabs Made Of Human Faeces By The People Of Sulabh International, India is the centrepiece of an exhibition by Santiago Sierra at the Lisson Gallery in Camden. Created to highlight the plight of low caste scavengers in India whose job is to remove human waste from toilets and carry it away in baskets on their heads – an unimaginably unpleasant task with huge health risks, let alone the societal snobbery that goes with it. Sierra’s shit was collected in India and dried out for 3 years so there’s no lingering stink or sanitation risks to worry about. The political message of the work on the other hand should give cause for concern.

On a lighter note, Mighty Booshster, Noel Fielding, has his first art exhibition starting today upstairs at the delectable Maison Bertaux in Soho. Lots of his work has previously been displayed in the very funny telly programme but now you can take it in without having to pause the DVD and enjoy a cup of tea and an iced fancy to boot.

Santiago Sierra's exhibition runs at the Lisson Gallery till 19 January. Noel Fielding's work is shown at Maison Bertaux until February 29 (and you can buy them if you like).

Image of 21 Anthropometric Slabs Made Of Human Faeces By The People Of Sulabh International, India courtesy of Santiago Sierra's website.