You're A Flyer Not A Lover 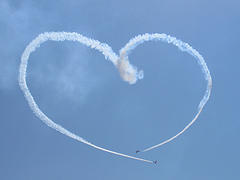 Here's a word of advice if you're thinking of using one of the 12 private suites on the new A380 super jumbo to indulge in some carnal activities: KEEP THE NOISE DOWN! Or use the toilets like everyone else.

That's not the word from Singapore Airlines who will be flying the jets to Singapore out of Heathrow next year. They say: DON'T, but we here at Londonist towers could never deny anyone the opportunity to be bumping uglies at altitude.

To be fair, what SA actually said was:

All we ask of customers, wherever they are on our aircraft, is to observe standards that don't cause offence to other customers and crew.

'Offence' apparently arising from the discovery that the suites aren't soundproof, although they don't say how they discovered this, who was involved or what position they'd reached at the moment of screaming. We tried to find some more information but it wasn't listed under in-flight entertainment.

Hopefully customers will adhere to the request because we don't need any further delays at Heathrow check-in. We can only imagine travellers being asked to remove condoms from their wallets and placed in secure bags, whilst the list of prohibited items in hand luggage grows to include blow-up dolls, vibrators, whips, chains, nipple clamps, bondage masks, butt plugs and Ben Wa balls. And will 100 millilitres of lubricant even be enough?

So BBCi style we have to ask if any of our readers have joined the 'mile-high' club? How was it for you? Where on the aircraft did you do it? Which airline is the best for shagging? Are there pictures up on flickr? OK, maybe not the last bit. But perhaps you'd like to use the comments section to let us know.