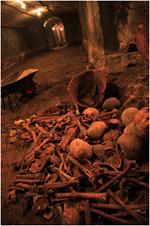 Something is stirring in the catacombs beneath London Bridge. A cache of skeletons has been uncovered close to the steps where Nancy betrayed Bill Sykes. And construction workers on the site of a new museum are too afraid to work as tools go missing and lightbulbs explode.

What sounds like the cover blurb of a Neil Gaiman novel is being presented as fact over on the BBC. Apparently, two Kentish brothers building a new museum about the bridge have uncovered dozens of skeletons. Some have holes in their skulls, raising the possibility that they belonged to traitors and once adorned the tops of spears on London Bridge. The finds may also belong to a plague pit, or a burial ground of Southwark Cathedral.

The remains have certainly put the willies up contractors working on the site of the soon-to-open London Bridge Experience. According to Lee Scriven, one of the owners: "Even the toughest lads aren't keen to be down in the tombs on their own now and I've noticed that they're tending to be moving around the site in pairs. I can't blame them really, there is a strange feel about the place".

Of course, it could all be a Hallowe'en prank, or a bit of pre-publicity for the museum. But this sounds so juicy, we might just investigate this one a little further...