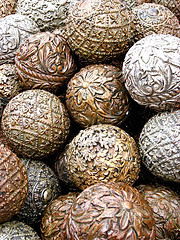 Like us, you're probably just starting to think about Christmas shopping. If you'd been out shopping yesterday, and had a spare £9 million or so, you could have picked up a very lovely Faberge egg. That's right. Nine million pounds. Like us, that's probably more money that you've got to hand.

Of course, there were only 68 of them made, and the last one was made in 1917. So it's not like someone just spent nine million quid on something you could pick up down at the shops. The egg was bought by a Russian collector, who will be bringing the egg back to Russia. He beat the previous record for Faberge egg purchasing by about £2 million. This one isn't just any egg, though. It's the Rothschild egg, and is one of only three with a clock and mechanical figure. It's also quite large. Nine million pounds large though?

That's an awful lot of money.

But don't mind us, we're just jealous. We wish we had millions of pounds to spend on jewelled eggs and the like. Instead we'll be down the high street looking out for three for two specials so we can stock up on our Christmas gifts. There probably isn't a special on Faberge eggs, so we'll save buying one of those for next year.