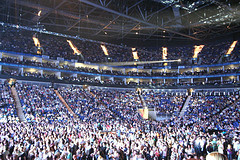 Shh! We don’t want to jinx things, but apparently the O2 is set to become the busiest and bestest venue in the world. (Well, bestest is perhaps subject to opinion: the Shepherd’s Bush Empire is pretty hard to beat if you ask us.)

So hurrah for the dome, and hurrah for the Greenwich Peninsular, and hurrah for all the people who coughed up to make it happen. One of the most embarrassing economic whoopsies of British architectural history (OK, before you all ‘write in’, Londonist knows this is a sweeping and subjective statement) has risen from pending dismantlement and imaginary ashes to become a credit to brown-belt London.