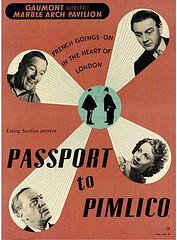 Recently we've been doing some research on Scotland, and while we haven’t come to any firm conclusions on the West Lothian question, it has prompted us to wonder – would London be better off as an independent country?

We’d keep more of our tax money to begin with. It’s been estimated that London subsidises the rest of the UK to the tune of £13 billion a year – so that’s Crossrail paid for by the end of next year. And maybe we could even afford the Olympics.

On the downside, London is pretty poor when it comes to natural resources, so we’d be heavily dependent on imports - although when it comes to energy, the UK is heading down that road already, as North Sea oil runs out (and the Scots threaten to go it alone). Also, an independent government would come with its own bureaucratic costs, duplications and overheads.

And unlike Scotland, London wouldn’t benefit from a sudden influx of businesses, immigrants or diplomats – all of the above are already here.

Practically speaking, while an independent London is good fodder for Ealing comedies, as a highly integrated region with no clear geographic boundaries (except maybe the M25) and entirely surrounded by England, flying solo would be pretty impractical.

Greater devolution, on the other hand, is an idea with a lot of political steam. Whatever you think of his policies, Ken has stretched his mayoral powers as far as possible. He’s pushed the case for a strong local London government and getting our fair share of taxes and economic development, and future mayors of whatever party are likely to continue the trend.