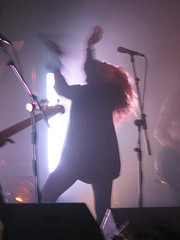 Whilst many, last night, were labouring under the somewhat unreasonable expectations that our national football side might do something a little old school, like win, there was a group of us who went home late with a collective smile on our faces.

The aforementioned happy folks gathered at the 229 Club, at the far end of Great Portland Street. There we faced drums that go thuddity thuddity thuddity boom, guitars that go danga danga danga danga or gnr gnr gnr gnr gnr and occasionally skreeeeee acka acka acka, bass that goes durm durm durm durm, and a smoke shrouded back-lit blonde-fringed statuesque pixie with a penchant for aggressively bashing various jangly sticks, at least one of which looked as if it might also be used by military interogators in countries with poor human-rights records. She is dressed in what we think is currently referred to as 'the London look': boots, tights and bottom hugging long t-shirt (with a big silvery moon if you really want to know). It's the kind of thing you see Kate Moss prance about in when she's pretending to rock, and pretender she is for The Duke Spirit's Liela Moss IS ROCK. She shakes shimmers shimmies sways smiles; all presence pointing posing pouting, she even stands, inducing near cardiac arrest, with one booted foot on the monitor. All of which would mean little if she didn't have a voice that cuts across the land (so sorry) like a .50 cal machine gun through a family Ford Escort.

We here at Londonist towers have always been partial to a touch of the Spirit, and their return is a good thing. With nout but a new EP to peddle and an album's worth of new stuff waiting out there in the wings, they look happy being back playing on home turf, drowning us in their new sound. It's more melodic, fuller but not Fuller, there's even a walk on keyboard player for good measure. And up on 229's viewer friendly high stage, it rocks. And some days that's all you need. Big, bold, brash, clear, unfussy, low frills rock'n'roll, with just enough twang, played with energy and vigour and smiles all round.

Once again, the bass breaks near the end, and once again it gets fixed to a rousing reception. This may be part of their stage show, it may be serendipity, it may be evil Londonist karma, it may just be a random co-incidence. On the strength of tonight's show, we'll be back next year to check.

The Duke Spirit's Ex Voto EP is out now, the new album is not. They will be on tour again next year.