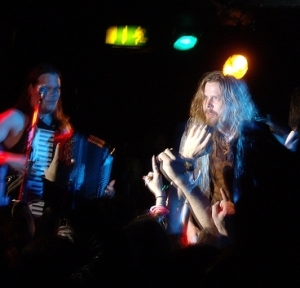 The name of the band Korpiklaani means 'forest clan' in Finnish, so perhaps it isn't so surprising that the band started their set at Camden Underground an hour or so late. Our theory is that they got lost on the Tube, distracted by the leafy promise in such place-names as Oakwood or Wood Green or Green Park, only to be met with bitter disappointment upon venturing aboveground. What really matters is that Korpiklaani eventually made it onstage, and that when they did, their charmingly good-natured brand of folk metal was exactly the antidote to encroaching winter that the audience needed.

Support was provided by "rock'n'troll" metallers Kivimetsän Druidi who were an oddly-assorted bunch: a frat-boy bassist who wouldn't look out of place in a metalcore band; a corpsepainted black-metal-style keyboard player; a male singer/guitarist who growled in a generic death metal way; and a goth-y female singer who was obviously quite a fan of Tarja Turunen, although sadly she was no match for the former Nightwish frontwoman in either vocal range or power. The Druidi were not well-served by the crowd's impatience to see the main act but gave a solid, if pedestrian performance, which suffered somewhat from all the elements thrown together higgledy-piggledy.

Korpiklaani, however, were a tonic. The kind of folk metal that even non-metalheads can enjoy, their songs, even the ones with English lyics, draw heavily on their Sámi and Finnish heritage; lead singer Jonne Järvelä has even been known to yoik. While the electric violin and accordion maintained the folk vibe, Jonne's cheerful growls and the bouncy, crunchy guitars kept things heavy. Korpiklaani's songs have a decided alcoholic tinge: songs like Let's Drink, Beer Beer and Happy Little Boozer went down as smoothly as a draught of finest mead; Wooden Pints was another highlight. A few drinking horns were held aloft in the front row - which paid off when bandmembers filled them from the stage. The full-capacity audience was in a party mood, as the rather (unnecessarily?) violent slampit to the left of the stage showed; this Londonista picked up a few new bruises, but it's all part of the fun, isn't it?

The band's warm wall of noise and intricate, galloping rhythms, built on the solid foundation of Matti Johansson's drumming, filled the low-ceilinged space of the Underworld amply, and a couple of intrepid souls - including singer Jonne himself - even managed to crowdsurf. Such breaches of health and safety guidelines paled into insignificance, however, beside Jonne's decision to light up a cigarette on-stage. How very shocking! The forest folk must be far freer spirits than we obedient Londoners (except for everyone who was smoking in the loos, of course - just like being back at school). A few chords of Sabbath in the encore gave the trad fans an excuse to headbang, then a couple more songs gave the opportunity for a final bout of arms-linked circle dancing before we were thrown out into the grim (but not yet frostbitten) Camden night.