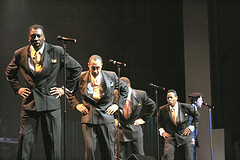 Motown legends The Four Tops won a victory in court last Friday, as they successfully prevented a rival band from touring with their name. Apparently singer Viscount Oliver Miller had been touring with his band, who went under the somewhat suspect name of "Viscount Oliver's Legendary Four Tops". There were surely Four Tops fans who were hoodwinked by this name trickery and attended the advertised gigs, assuming they would see at least one member of the Four Tops performing.

They would have been very disappointed. Viscount Oliver has never been a member of the Four Tops, has never recorded with them, never performed with them, very likely never even met them. He has, however, pretty obviously heard of them and thought that maybe club bookers and music fans wouldn't notice the difference between him and the genuine version. Clearly someone noticed, though, and the Four Tops jumped into action, taking Miller to court.

The real Four Tops, along with fellow Motown superstars The Temptations, will be performing at the Royal Albert Hall on 19 & 20 November. Tickets start at £24.50 and can be purchased online or through the box office.