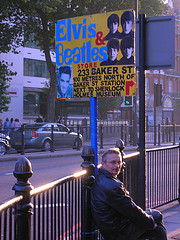 Music, as Bono, Geldof, Martin or any of the members of Screwdriver will tell you, is a tool for peace and harmony. Selling memorabilia, on the other hand, would seem to be the domain of scrapping dogs, hound-like or otherwise.

But now we hear that the owners of Elvisly Yours and The London Beatles Shop have settled their differences in a flurry of cheesy song references.*

Story goes like this: Beatles guy (Howard Cohen) and Elvis guy (Sid Shaw) share a lease on their next-door Baker Street stores. Beatles guy opens a museum in Elvis' basement. Elvis guy later wants the basement back. Recrimination and court proceedings ensue. There's more and if you really, truly care about such gubbins then the D***y M**l has another searing in-depth analysis. And pictures.

Thankfully the judge suggested the matter be settled out of court, possibly to avoid having to endure the Elvis impersonator Shaw had brought in as a witness. No-one knows the details of the settlement due to a confidentiality agreement but Cohen's Beatles museum is now across the street and Shaw will be launching an Elvis karaoke bus service from his basement after all. Hooray!

“ain’t nothing but a hounddog and he ain’t no friend of mine.” (Shaw on Cohen)