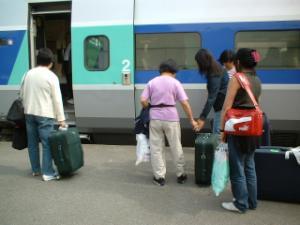 London is one big stage for endless, tiny bits of theatre. Dashing through rush hour crowds at the train station has its own particular brand of dramatic tension and a company visiting from Australia is presenting this part of everyday London life in a very different light.

Back to Back Theatre is bringing their performance Small Metal Objects

to London as part of the Barbican's Ozmosis season of contemporary Australian performance. The company of six are all deemed to have intellectual disabilities; this seems to make little difference to the rave reviews of their work that trail them as they touch down on our shores.

Ignoring the more conventional performance space in the nearby Theatre Royal, Stratford East, the group are setting up a bank of seats in Stratford Station and putting the audience among the real-life rush hour crowd. Every audience member gets a set of headphones that picks up the dialogue of the actors mingling with the commuters and the action unfolds against the most real-life background possible.

Audiences listen in to what characters Gary and Steve get up to somewhere among the crow; they are not the types who attract a lot of attention normally, but their meeting with two ambitious executives becomes an exploration of a person's value according to their productivity. Being so close to the glittering towers of Canary Wharf, it promises to be a sly look at how fair and accurate this kind of evaluation can be, carried out by a company of performers who don't often get therespect they deserve.

It's rare to get so excited about a long evening hanging around a crowded train station. It is even rarer to put on headphones in order to engage with the crowd rather than block it out, so we're going to seize this chance and enjoy it. You should too.

Small Metal Objects by Back To Back Theatre at Stratford Station, from Wednesday 31 October. For more information on the performance, go here. For tickets and venue information, go here.