By M@ Last edited 168 months ago
M@ Save Smithfield Market 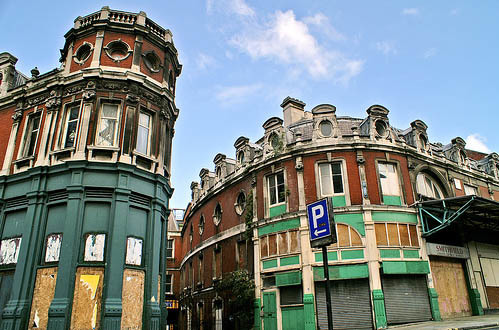 Revolting peasants and Scottish heroes, a buried river, and a 1000 years of death, slaughter and destruction. Smithfield surely deserves some kind of cultural centre. And there just happens to be the perfect place to put it, if we act fast…

As many readers will know, several buildings of the famous meat-market complex are under threat. The General market, Fish market and Red House are in a dilapidated state and the targets for demolition and redevelopment into office space by Thornfield Properties plc. The structures are deemed to be of little historical importance or architectural merit. This is work by Horace Jones we‘re talking about. The Victorian mastermind of Leadenhall Market, Billingsgate and Tower Bridge.

It’s almost crunch time. With the buildings’ fate hanging in the balance, Ruth Kelly has called a Public Inquiry, which launches on 6 November. Meanwhile, English Heritage have an exhibition about the area, which runs until 2 November.

It’s so obvious what should be done. Fix the buildings up, employ the basements and tunnels that riddle the area, and turn this atmospheric quarter into a celebration of Smithfield’s past.

Smithfield is so drenched in history it makes Westminster Abbey look like a hotdog stand. A market has existed here for a millennium. Watt Tyler was cut down within its boundaries, ending the Peasants Revolt. Smithfield has been the site of countless executions, including William Wallace and the Protestant put-downs of Bloody Mary. For 700 years, Bartholomew Fair brought the area to life each summer, with monkeys and freaks, dances and brawls. Nearby are the sites of two monasteries, one of the most ancient churches in London, and the oldest hospital in England.

The hidden Fleet River still flows beneath adjacent Farringdon Street. London’s first underground railway terminated to the north. In one of the worst incidents in London of WWII, a V2 rocket hit the market buildings, killing 110 people - mostly women and children. More humans and animals must have lost their lives on these few acres than any other part of the city. Yet there‘s little to commemorate this incredible past.

So visit the temporary exhibition, spread the word, leave a comment here and write to some of the people listed here.

With thanks to Dartar for the image (and prodding!)