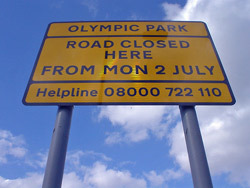 Phosphatic rock. A radium-luminised gauge dial face. Radium paint. It sounds like an amateur nuclear hobbyist's shopping list, but these are just some of the scary-sounding radioactive materials found recently at the Olympic Park site in east London.

Contractors uncovered the objects whilst clearing a 100-year old waste tip near Stratford last month. A subsequent survey, ordered by the Olympic Delivery Authority, revealed "low level" contamination and hotspots of the highly poisonous heavy metal radium-226. However, the ODA stressed that there was no risk whatsoever to public health.

The site stands on the grounds of a former factory that produced radium paint, which was used to make 'glow in the dark' markings on aircraft dials and watches. It was banned in the Fifties after around 100 painters contracted radiation poisoning - so don't get any clever ideas about daubing it all over your body for Halloween