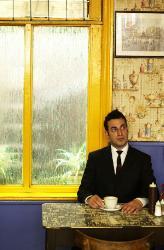 Back in July, we went to see Leftovers at Dino’s Grill in East London. Leftovers was a performance piece in which audience members were called upon to smell, taste, touch, listen and watch, as active participants rather than observers. We got very excited. We called it a ‘journey’ and ‘an act of remembrance’ – we said that the meal we were served was ‘the most satisfying full “English” breakfast available’. Now artist Mem Morrison performs Leftovers in London again, only this time it has been transformed into a stage show, commissioned by Chelsea Theatre and Nottingham NOW Festival.

In short, Leftovers concerns itself with integration and belonging. Morrison’ Turkish-Cypriot parents were proprietors of a South East London greasy spoon and the juxtaposition between the ‘foreign’ and the British (in the shape of the full breakfast) serves as starting point from which Morrison explores his own identity and the way food can bridge differences between people.

Anyone who has ever seen Morrison’s other stage shows will know that he can easily captivate an audience on his own, as he is a charismatic and charming performer. But can a performance that relies on the audience’s sensory participation really translate in a manner that is equally moving and relevant? And what we really want to know is: will we yet again be fed?

The performances in the London in July sold out quickly, so book now to see if Morrison also this time succeeds in touching hearts and minds.

Leftovers is at Chelsea Theatre on Wednesday 24th October. Entrance is free, but booking is essential. More information here and here.