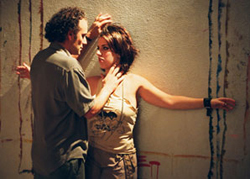 The Barbican's love of all things Brazilian continues this week, as it launches into a week-long season of Brazilian cinema that picks up where last year's Tropicalia left off.

Cinema of Brazil: Literature into Film, presented in conjunction with the Embassy of Brazil, aims to 'celebrate the bond between literature and cinema in Brazil'. It's a neat idea, allowing curator Adriana Rouanet to cast her eye across the length and breadth of the country's cinematic output. The festival sits popular 1970s material like Dona Flor and her 2 Husbands alongside critically acclaimed films from Brazil's recent cinematic renaissance, such as 2001's award-winning To The Left of the Father, which finally receives its UK premiere some six years after the fact. There is also new work from the likes of João Falcão and Beto Brant.

The season covers not just the fecund output of Brazilian novelists, but takes in other forms of literature: The Conspirators is based on Cecilia Meireles 1953 poem Romanceiro da Inconfidência, while The Roots Of Brazil takes as its subject matter the titular exploration of Brazilian society by Sergio Buarque de Hollanda. There is also a symposium on Saturday that examines the process of adapting literature to the silver screen.

While the focus is on the last four decades of filmmaking, the country's highly regarded verite-style Cinema Novo of the Sixties is represented by the presence of legendary director Nelson Pereira dos Santos, who will be speaking at the opening gala and introducing Crime Delicado, Beto Brant's peek at the clandestine underbelly of cosmetically perfect Brazilian society.

Meanwhile, for more Carioca culture, get down to the Embassy of Brazil this week for a last chance to see Sebastian Salgado's In Principio, a collection of the photographer's stark chiaroscuro prints chronicling the life of Amazon coffee growers.

Cinema of Brazil: Literature into Film at the Barbican, 4–11 October.

In Principio, Gallery 32, Embassy of Brazil, until Saturday 6th October.