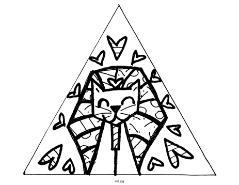 Tutankamun's coming to town! First we had Anubis and now pyramids are popping up all over London.

Created by Brazilian pop artist, cheeky looking Romero Britto, with the help of 1500 school kids, the biggest - a colourful 45fter - was unveiled at Speakers' Corner, Hyde Park yesterday whilst its smaller sibling, just 25ft, will sit outside the O2 on Peninsula Square, guarding access to the first major exhibition at the sweetly named Bubble space.

We can't help thinking that using jolly pyramids as heralds of King Tut and staging it at a venue called the "bubble" are to distract from the fact that this is a massively morbid exhibition about long dead royals in glamorous coffins wrenched from their final resting places and stripped of their precious things.

A further 8 mini (well, 8ft) pyramids will be scattered around town for the duration of the exhibition.

Tutankamun and the Golden Age of the Pharoahs opens at the O2 Bubble on 15 November and runs right through until the end of August next year. Book tickets online at the dramatic, flaming website.

Image of design for cat pyramid courtesy of The Pyramid Project.