Londonist was privileged enough to be able to sneak a quick interview with Gavin Pretor-Pinney in between his cloud-gazing activities and his idling. Actually, that was a very weak attempt at a clever introduction. Let’s try again with a drum roll this time. Meet Gavin Pretor-Pinhey, the iconic founder of the Cloud Appreciation Society, and the co-founder of The Idler. Oh, and proud London resident.

Gavin, Londonist can easily understand idling (what is blogging except another form of idling) – but why clouds? What got you hooked to begin with?

I just think that they are one of nature’s most beautiful and underrated displays. I thought it was about time we stopped complaining about them. I first became interested in clouds when I was four and a half, looking out of the window of my mother’s Mini has she drove me to school in Roehampton.

Do you have a favourite cloud? One that makes your heart soar?

The lenticular cloud is always a winner. You only tend see them in hilly or mountainous areas, as they form as a result of airstreams lifting to pass over high ground. The good thing about lenticular clouds is that they can look remarkably like flying saucers.

Isn’t London a bit of a special case when it comes to clouds? Are the clouds different over a big conurbation? Isn’t it actually better to cloud spot in the country?

The pollution of a big city can make the sky hazier which tends to make the clouds look less attractive. But the thing about cloudspotting is that you can do it anywhere. If you are in a city, you just need to get a bit of elevation for an uninterrupted view. Good cloudspotting places in London include Primrose Hill, Parliament Hill and Greenwich.

Have you any thoughts on the inaugural Blue Sky Day which was held in Trafalgar Square this year?

It was a marketing drive by the travel company Expedia. I try to fight blue-sky thinking wherever I find it. It is criminal that these travel companies try and persuade us that we can only be happy when we fly somewhere it is a blue sky every day. There is a beauty in the everyday and we would be wise to appreciate it.

It is a stunning website, with lots of pretty bits – isn’t it very high maintenance?

Yes it is. I need to step back from it, but find it hard to had things over to others.

You are not from a scientific background – don’t you get irate meteorological types on your case sometimes?

No, I really haven’t had any negative reactions from scientists. I think this is because I’ve not tried to pretend that I am a meteorologist. I just like clouds.

Tell us something funny that’s happened to you since you became spokesman for the clouds. You must have had some odd reactions at first….

We have a couple of members in Iraq.

One of them has made me an honorary member of the Amateur Astronomy Association of Kurdistan. Not a lot of people can claim a title like that.

On the Idler Website there is quite a debate about whether London is or is not a Crap Town contender. Was it even a contender in your book?

No. I lived in Rome for seven months a few years ago. When I returned, it was with a fresh perspective on the city that has always been my home. I realised that what makes London special is not red busses, black taxis or Buckingham Palace. It is its diversity. 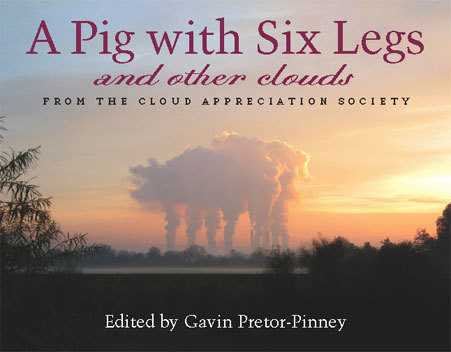 What are your London high points and low points?

High points are things like early-summer balmy evenings outside private views in East London. Low points include my bike being nicked four times in a row ‘till it was uninsurable.

Not yet. That would surely be another low point if I had.

A Pig with Six Legs and Other Clouds, edited by Gavin Pretor-Pinney, is published by Sceptre, costs £10, and contains photographs of clouds in the shape of things sent in by members of the Cloud Appreciation Society.

Membership of the Cloud Appreciation Society costs a paltry £3.00 for life membership, and you get a certificate and a badge. It’s gotta be done.