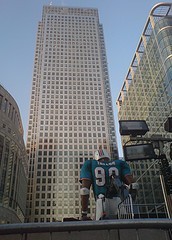 Dick Maxwell, who retired last year as the NFL Senior Director of Broadcasting after almost thirty years with American Football's governing body was Wednesday night's guest lecturer in the seminar series organised for students of the MSc in Sports Management and the Business of Football at Birkbeck, University of London. Nowadays an NFL consultant in the areas of television and instant replay, Mr Maxwell kindly fielded a few questions for us after his well-received presentation on how the NFL's approach to sport governance might appeal to decision makers in leagues such as our own Premiership.

Does it matter if the basic fanbase of a sport are priced out of physically attending events if they can still watch it on television?

Yes, it does, because I remember Commissioner [Pete] Rozelle in earlier years said that he never wanted to have a sport that was a studio show, not with a significant audience, that was just a television sport. There’s a balance between having a full stadium with enthusiastic fans and television, and it’s actually a better television product to have a stadium full of fans. It’s a balancing act, but the NFL’s gone to great lengths to make sure that it’s attractive for the fan to come to the stadium.

How does the NFL structure of mini-leagues and then playoffs offer an alternative to our traditional one division "round robin" fixture list?

In the NFL, depending on where they finished the year before, the top teams play the top teams as part of the scheduling formula. Some of it [each mini-league, or division, of four teams] is set in stone for the next few years, you know who you’re going to play, but there’s a couple of slots that you put the number one team of one division against the number one team of a different division and that will create a superb matchup for television, so you can strengthen your television package to have a couple of the slots for two teams that were very good from the previous year to play each other. Conversely, you have teams that maybe did not finish so high play each other, so one of those teams has to win. One of those teams and their fans will feel better about it the next week.

The NFL thrives on striving to offer each of its 32 teams the opportunity for success each year. Are there any issues with a high profile sport being dominated year after year by the same four teams?

It depends what type of league you’re talking about and what you want it to be, but I go back to the philosophy in the NFL that you’re only as strong as your weakest link and you become more of a national sport when everybody can compete equally for a chance for the playoffs or the Superbowl. It’s been a successful model for the NFL.

"The NFL Giant Sizes Up The Task In London", captured for the Londonist Flickr Pool by Andy Wilkes.

What would you say to advocate to the English Premiership the cause of instant replays for match officials?

I would never get involved in what another league should do. That’s not the NFL way. However, to answer your question, the instant replay maintains the integrity in the outcome of a game as best you can and Major League Baseball in America is going to look at it freshly because they had a couple of close home run calls during the playoffs and during the end of the season. The technology is so good with High Definition television that if you can help a referee make a correct call, that’s always been to the benefit of the fans in the NFL’s eyes.

What are the organisational challenges that a regular season game in London presents to the NFL?

Well, they’re enormous because unlike a pre-season or exhibition game these games really count so you want to make it as much of a business trip, an away game, as possible for the two teams, the Giants and the Dolphins. I know they were very interested in making sure they had proper training facilities. They fly Thursday night and arrive Friday morning, I believe. They’ll have light workouts Friday and Saturday, but you want them to have good hotels, training facilities and then most importantly they have their "off week" the week after this game so they get that chance to go back and recover from the travel lag.

What would you say is the single most important thing the English Premier League can learn from the NFL with regard to their relationships with the media?

Again, I can’t speak for the Premier League, but I know that whether it’s television or the print media, those are wonderful vehicles to get your story out as a team and that you should use it as an opportunity to get your story out and across and to be open about things. That, I think, has been the standard in the NFL, but I don’t know how that would apply to other leagues.

You've recently been involved in coaching former players to become sports announcers. Many English pundits, especially ex-pros, are accused of being too bland. What are the main things you would look for in a player hoping to make the switch?

To get hired to be a sports announcer if you’re a former player you need to say something insightful, you need not to be bland. The [American] networks are always looking for good young voices that have some authority because they played the game. I know that networks do not want blandness. They want somebody that will tell the viewer something that they would not have noticed by watching otherwise, so I think that’s the credo for any broadcaster.

Oh, we just love the history of it. We have walked around London several times and will do so again in the next several days and it’s just a phenomenal place to visit and to spend some time.