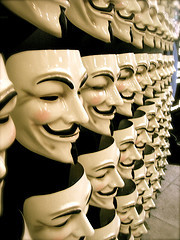 With bonfire night just around the corner, Parliament must be getting a little nervous. Unblinking beady eyes will no doubt be focused on Southwark Crown Court today where Brian Haw takes on Sir Ian Blair over the removal of his placards way back in May 06. No updates as yet but yesterday the BBC reported a master stroke of anti-terror logic in that Haw's camp could present a terrorist target. More specifically that Haw's placards and banners could be used to hide a terrorist bomb.

It would not matter to the terrorist if it was a peace camp. They are indiscriminate, regretfully. They would seek to cause mass harm, mass panic.

We love the idea that it's regretful terrorists are indiscriminate, the world would certainly be a nicer place if they picked their targets more carefully to minimise loss of innocent civilian life. But indiscriminate they certainly are. Whether or not they'd consider using Haw's camp as a good place to hide a bomb is another matter entirely.

So whilst, yes, it is conceivable that this could happen, there are numerous other ways to hide or place bombs that would involve much less effort and seem to have paid off pretty well around the world so far, little things like bombs in bags or under jackets or in cars or trucks or prams etc. All things that are still walking or driving freely around the cities of the world, even close to Westminster, making anything and everyone a potential terrorist / terrorist target. And has anyone even considered the possibility that one of our MPs might be an Al Qaeda sleeper agent, waiting to be activated Manchurian Candidate style? What lengths of paranoia do we / should we steep to next in an attempt to protect those loveable parliamentary rogues and what's that weird click we hear every time we pick up the phone...

Flippant? Possibly, but we can't help but wonder whether this latest claim is just another attempt to get Haw out of everyone's hair. So whilst we shouldn't scoff at issues of national security, nor the threat of further loss of life (even MPs), what we're really saying is that if the powers that be want to win the war on trust and honesty, then they're going to have to come up with something a little better than that.