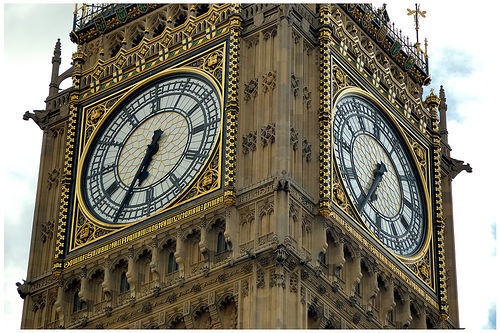 It's been pretty quiet in London recently. Eerily so. Until today, Londonist hadn't been able to work out what was wrong. We're a bit slow sometimes and had completely forgotten Big Ben was being restored. Well from today we'll be able to hear it again. Hooray! Bing bong! Bing bong!

The bell tower was in full working order at Midday today. This obviously makes Londonist very happy. Things had been feeling a bit strange around Westminster, and for once it had nothing to do with politics. Not having Big Ben chiming is a bit like someone taking all of the pigeons out of Trafalgar Square one day. It just doesn't feel right.

The clock has had it's bearings replaced which means it can chime again on the hour and every quarter of an hour too. All of this was done in time for its 150th anniversary. The Clock was built in 1859 so it's been going for a pretty long time.

And long may it continue. We've missed those familiar chimes and will look forward to lunchtime of bing bongs instead of silence (apart from sneaky political whisperings we swear we can almost hear). We might even take our Ipod headphones out for once.