Are We Committing Avian Genocide? 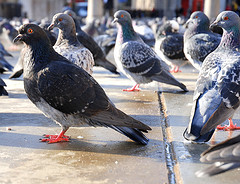 We Brits love our birds and animals. We love to shrinkwrap their body parts and burn them on bbqs on a Sunday afternoon, we love to take them for long walks in the park and we love to watch their majestic beauty on BBC documentaries with a Sigur Ros soundtrack. What we won't countenance is letting the little buggers run free in our green and grey and pleasant land. They do tend to shit everywhere.

Take the humble pigeon. The more cynical amongst you might say that these scabby scavengers are more representative of life in London than any number of routemasters on tourist trails or Ken's marketing team. They're like a Friday night in Leicester Square with wings. Which is why, after a concerted programme to house train the flighted blighters had failed (ok, so we made that bit up), the ban on feeding pigeons in Trafalgar Square was recently extended to the North terrace. The act of chucking a scrap of bread at a grubby grey bird anywhere in the square will now make you liable for a £500 fine. We're not yet sure if you'll also get put on the DNA database, have your credit rating removed and your home stuck under a flightpath but it can't be long...

Now it would appear that the remaining pigeons that still flock to the square don't read Darwin. Instead they seem to retain some sort of ridiculous twentieth century homing instinct and can't figure out that any street in London provides a multitude of tasty meals, not all of which is stuck to the tarmac with gum. The Pigeon Action Group are pissed and are saying that as a result, Trafalgar Square's pigeon flock is starving to death. Chalk one up for Charles then. Westminster council have retaliated, describing the birds as 'resourceful' and that they will go where there is food. Which seems to be what they were doing in the first place.

Is it cruel to feed pigeons or a basic human right to enjoy nature's bounty? Is it cruel to starve them or poison them or hunt them down with bigger birds with sharp beaks that may also shit everywhere and leave bits of carcas on the steps? Perhaps we should call in the US Marines. Either way, it's not over till the last fat pigeon sings.