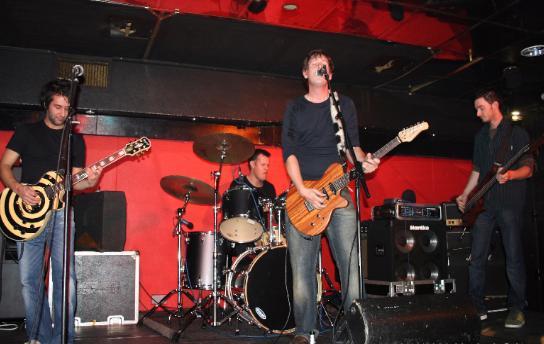 Sometimes, Londonist stumbles across fantastic new bands by accident. (In this case getting drunk on wine playing video games.) We were introduced to Mitch. And now we're introducing Mitch to you. Meet Mitch.

Whereabouts in London are you based and what's ace about it?

Darren - We're based in all 4 corners of London - that's what's ace, we all meet in the middle!

What are you up to at the moment?

Darren - Got a gig this Saturday (Lark in the Park) and we're trying to finish off our latest release.

Why should we listen to you than every other new band out there?

Darren - Because we're fab, have the coolest name in the world, each songs its own little ditty and not just a rehashed version of another song.

James - Also I think our live performances really set us apart from many other bands we see on the circuit.

Speaking of names, where did the name come from?

James - Darren and Jason have a fascination with 'The Hoff'. You can work the rest out yourself.

Darren - We played the Borderline playing just before Thunder - now that was cool!

James -To play or frequent? I've enjoyed playing the Purple Turtle, but to see gigs, it's gotta be either Koko or Astoria.

James - Ikea (preferably the one in Wembley).

Darren - I've nicked a guitar off a couple of buskers once a few times after coming out of clubs. I made them money so they didn't complain!

What's your favourite club in London?

James - Friday nights in Cargo or Fabric plus the list given by Darren. Depends on the mood.

James - For the whole year is a bit hard so I'm saying at the moment I'm enjoying NIN - Capital G.

Darren - Mitch. We've also got friends in Deceit so should shout out to them!

Darren and James - Lark in the Park, Islington.

Darren - Where you can get a pint in central London for less than 2 quid.

James - A beautiful garden in the heart of Covent Garden (public place I must add). Pretty much always empty.

(Londonist would like to stress that Mitch did understand that they were meant to share their secrets in this question. They were meanies and wouldn't. If you can tell us where this garden is please do. Then stand next to the members of Mitch and talk loudly on your mobile phone.)

Darren - Haha! nope, but once at Orpington station if that counts!

James - Um, sadly yes...all over South Kensington platform... I blame it on a dodgy pint myself.

ps - we're sure Jason and Justin are lovely too. They were busy doing mysterious musician things when we wrote this. Playing with plectrums and things. They say hi.

Mitch are playing at Lark In The Park, 60 Copenhagen Street Islington. They're apparently going to be more lively than a lively thing on stage. It's only a fiver so you should go. And listen to them here.