Except they’ve moved to a tip in Croydon and are decidedly less furry than their 1970s incarnation. 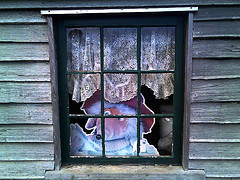 When Channel 4 advertised for volunteers to participate in a prize eco-challenge, most of the respondents were anticipating the jungle, or polar icecaps perhaps. What they actually ended up doing was living as modern Borrowers on rubbish for three weeks. Literally. They were plonked in a municipal refuse dump in South London and told to get on with it.

The much touted show has met with a lot of jeering and scepticism, a fact not helped by the fact that the rubbish with which they had to contend was pre-selected, designer stuff – clearly the real thing would have been far too dangerous and potentially toxic, but it does kind of take the raw spirit of adventure out of the programme. Furthermore, they were not actually obliged to forage for their food with the rats and the seagulls, but were, rather, provided with generous supermarket hand-me-downs (slightly-after-best-before stuff).

The show is also coming out right in the middle of the great, post BB, reality TV debate, and so is bound to be cited in an attempt to trash the genre (if you’ll forgive the tabloid-esque pun).

Whilst Londonist is quite happy to live in a state of ambivalence when it comes to fly-on-the-wall telly, we think that this particular instance is a great premise for a programme. It is obviously meant to make us think about what we throw away, which has to be a good thing. The act of making something out of nothing is one of the most rewarding known to the Blue Peter generation(s), and we are also fairly sure that somebody has snuck an Ikea gene into the pool somewhere which renders the idea of bashing bits of wood together unfathomably attractive. Ever since Londonist saw (the bathtub sofa in) Breakfast at Tiffanys, we have had a tendency towards eccentric furnishing – we will be glued to our sets tomorrow evening.

“Dumped” is on each night from Sunday-Wednesday at 9pm.