Or, stuff about London you think is true, but is actually rubbish. 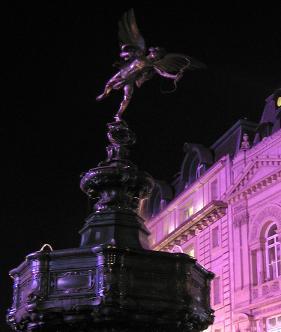 1. The Eros statue in Piccadilly Circus.

Ah, the Eros statue. A symbol of love in the midst of tourists and shoppers. How romantic. Er, actually, sorry to dissapoint you, but it's all rubbish. Think we're making it up? Allow us to explain.

The statue is a memorial to The 7th Earl of Shaftsbury (yep, that's where the avenue got its name) and it's meant to represent the 'Angel of the Christian Charity'. Not Eros, the Greek God of love.

Anthony Ashley-Cooper was born in 1801 and became one of the Victorian era's best known philanthropists. He put a huge amount of work in the welfare of children and was a big fan of Florence Nightingale too. Basically he did so much good work, the memorial fountain and statue were erected as a memorial for him in 1893.

The memorial actually used to be further west. In the Second World War, the statue was removed and replaced by advertising hoardings. It was put back in 1948. It wasn't placed in its current position until the whole of Piccadilly Circus went under reconstruction in the 1980s and it was moved to where it stands today.

Since the mistakenly named statue has a bow, everyone thinks he's shooting arrows like Cupid did. Making romantic mischief for all who sit around him. But the eagle eyed among you will have noticed that the bow itself has no arrow.

Apparently, this is because the 'shaft' or arrow is said to be buried in Shaftesbury Avenue. See, it's all linked to the Earl and has nothing to do with Eros at all. The name stuck and everyone has forgotten the 'Angel of the Christian Charity'. It's a shame really as this Anthony bloke seemed to be a pretty nice guy.