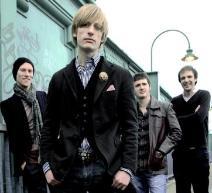 Just after seven, and we're arriving at the Monto Water Rats, rushed and slightly late having dashed across London, expecting to see an already performing Crispin Mills et al and a small crowd of appreciative and nostalgic thirty-somethings. Instead though, there's a sign announcing that the band wouldn't be playing for anoher two and a half hours.

Having split just three years after their seminal record, K, in 1999, the various members of Kula Shaker spent 5 years working on various solo projects before reforming in 2004 and working on their third album, Strangefolk. The record wasn't released until 2007, so the band obviously take as relaxed an approach to recording as they do to starting gigs.

When they do take to the stage, the reinvigorated Kula Shaker launch straight into "Hey Dude", which is, to be brutally honest, one of the three or four reasons why everyone is here, the others coincidentally all being tracks from K as well. There's no question these songs till sound great and leave us feeling like this is the late 90s or early naughties. It's fantastic fun but why aren't they playing a larger venue? Surely there's more than 100 people in London tonight who would enjoy this?

Next comes "Jerry was There", and then the obligatory new songs. Their new material stands out, not being immediately recognisable from numerous 5-year-old-rock-compilations, but is recognisably Kula Shaker. Perhaps it's not up to the sheer pop catchiness of tracks like "Hush" and "Hey Dude", but good, honest indie nonetheless.

As an encore the band finish up with "Hush", showing that they've lost nothing during their temporary split, and, from a limited and live listening of their new material, sounding like there's life left in them yet.