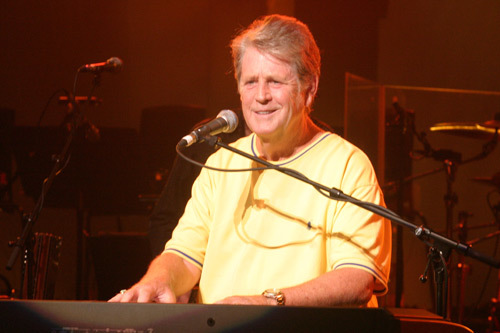 Arguably the best city in the world for a music fan to live, pop legends come to play in London all the time. Often not only do they come for just one gig, but they stay for a while when they could easily make haste for the comforts of their own homes to eat biscuits and play video games. Prince recently played the O2 for three full weeks, Sonic Youth resided at the Roundhouse for three days and now Brian Wilson of Beach Boys fame has returned for a week of performances at Southbank Centre's Royal Festival Hall.

Following on the success of debuting both Pet Sounds and SMiLE there, Wilson is back with an entirely new piece entitled That Lucky Old Sun. Commissioned by Southbank Centre to celebrate the re-opening of Royal Festival Hall, That Lucky Old Sun was inspired by the spiritual of the same name, made famous in 1949 by Louis Armstrong. Wilson arranged the music for this work to the lyrics of Scott Bennett and the narratives of SMiLE collaborator Van Dyke Parks, producing a lovely paean to the city of Los Angeles and the warm Southern Californian sun.

While That Lucky Old Sun is in no way a radical departure from Wilson's signature orchestral pop of vocal harmonies and dramatic multi-layered build-ups, neither is it a tired walk down memory lane. Pet Sounds marked the transition from the album as a collection of songs to the album as a unified work in its own right, with a sum greater than its individual parts. SMiLE naturally followed these footsteps, adopting an even more holistic approach. After one listen to the decades-in-the-making masterpiece, you can no longer imagine listening to "Heroes and Villains" out of context. It needs "Our Prayer/Gee" leading into it and it must be followed by "Roll Plymouth Rock", otherwise it feels incomplete. By the time you're three songs into SMiLE you're likely to be so elated as to end up listening to the entire album. In this regard, That Lucky Old Sun is no different, for with it Brian Wilson proves that he is the master of the art of the album and long-form pop symphony. Certainly for fans of the two albums most directly related to this latest effort, this is a must-see performance with no better way to experience it than here in its world premiere.

That Lucky Old Sun comprised the second set of the evening, bookended by an entire first set and two encores of classic material. Given hindsight, listening to "Dance, Dance, Dance" and "Do You Wanna Dance?" in 2007 one can see how these two simple tracks formed the basis for entire careers of punk bands like The Ramones. It was impossible to stay politely seated and ignore the imperative to get up and move.

As Brian continued his first set, he moved on to some of his more introspective and personal Beach Boys songs. Reminding us that we all need a special quiet place to retreat to when the outside world gets too hectic, he led us through the gentle tones of "In My Room", making the vastness of Royal Festival Hall feel intimate and warm. After humbly asking the audience if we'd ever heard a record called Pet Sounds, he treated us to some of the highlights of what many consider to be the greatest rock record of all time, including "Wouldn't It Be Nice", "Sloop John B" and his crowning accomplishment, "God Only Knows". No set of his material would be complete without the song that is as relevant to rock as it is to electronic music, the theremin-enhanced "Good Vibrations", and ever the entertainer, Brian did not disappoint.

Perhaps the most remarkable thing about seeing Brian Wilson perform live is watching his movements and gestures as he and his band run through the songs that made him famous. Most noticeable during "Good Vibrations", but equally present in any of his songs that boast large rises in intensity followed by sudden drops, Brian sits behind his keyboard engaged in a sort of air-conducting throughout. Moving his hands up slightly higher with each repetition of the mantra "I'm pickin' up good vibrations / She's givin' me excitations", it reminded us of precisely what we do when listening to the same song on our home stereos. When the drop hits, just before the chorus returns full-force with "Good good good good vibrations!", Brian lightly punched the air along with us. It was obvious from watching these motions that, as a song plays, Wilson holds each instrument separately in his head, suspended in a mental multi-channel mixer, giving his audience a rare opportunity to witness the producer and the performer as one.

The first encore of the night was a blistering rip through all of the upbeat numbers. Not breaking between songs, allowing the drummer to carry us from one tune to the next, again we could see how punk rock flowed directly out of the surf and garage of the early 1960s. Moving from "I Get Around" to "Help Me Rhonda" to "Barbara Ann", there was no time to breathe before stumbling head first into "Surfin' U.S.A." and "Fun, Fun, Fun". Since a two-set gig deserves two encores, the band returned to cover a song that Wilson said he first heard when Paul McCartney came to play it for him in his studio, before The Beatles ever recorded it. "She's Leaving Home" went on to become one of Brian's favourite songs, a fact which shone through in the reverent rendition with which he chose to end the night.

With so many artists reuniting to perform their classic albums live, it's a refreshing reversal of concept in the age of mechanical reproduction to see a musician present a work live before it's a recorded album. We're already anticipating Wilson's next record and this one isn't even out yet. Most likely That Lucky Old Sun will see more revisions and edits before the band sits down to record it in a studio, but from our perspective, we'd advise not to change a thing.