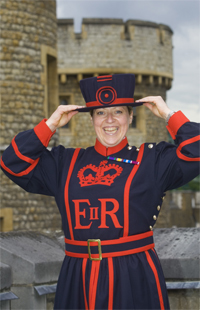 So sing the yeomen warders in Gilbert and Sullivan’s eponymous opera. (Actually, not quite eponymous, as they called it ‘The Yeomen of the Guard’, which any dedicated Londoner will tell you is not the same thing as the Yeomen Warders.)(Before you all e-mail in, like.)

And this is a merry tale, a girl-done-good tale, a story of pomp and pageantry and a bit of fun. Nothing too complicated or controversial. What Sullivan himself called ‘No topsy-turveydom, very human’.

Moira Cameron has every right to feel ‘peerly proud’ today as she slips into her new ‘undress’ uniform (blue, rather than the red and gold picture postcard one) ready for her first day of duty as England’s first female Yeoman Warder. She beat five male applicants for the (rather stingey, we feel) £20,000.00 p.a. job, which is only open to NCOs in the armed forces with a minimum of 19 years’ service behind them.

Londonist is only surprised that it has taken this long for women to penetrate the ranks – she will after all get to wear a theatrical frock coat and fancy stockings, feed the birds, talk to tourists and watch over the world’s biggest collection of bling. Nothing too blokey there. For sure the original Beefeaters probably needed the extra rations of beef they were reputedly given, as they were burdened with such onerous tasks as guarding real prisoners in the Tower.

Anyway, Londonist wishes Yeoman Warder Cameron the very best of British in her new role as one of the capital’s best loved icons.