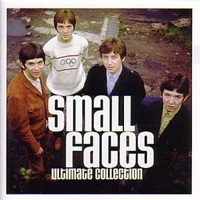 Being referred to as the father of TV celebrity Sharon Osbourne would no doubt cause Don Arden to throw one of his legendary tantrums from beyond the grave and hang the hapless BBC hack who penned these words from his office window. This after all is the woman who used to send the contents of her children's nappies hidden in Macy's boxes to music executives who'd pissed her off. Arden, whose behaviour earned him the nickname: The Al Capone of pop, has just been honoured with a nice shiny green central London plaque alongside the Small Faces on his old office on Carnaby Street where he signed them after only half an hour's meeting.

The plaque (paid for by fans of the band) was unveiled by Small Faces drummer Kenny Jones on Saturday, no doubt thankful for the way Arden paid off chart fixers to make their debut single a hit way back in 1965 but perhaps not for the long fight to get their royalties; they had to wait till '77. During his 60 year career Arden also managed, and fell out with / possibly threatened to kill Gene Vincent, the Animals, Black Sabbath and ELO - the latter both becoming impossibly loud and hugely successful. The Small Faces went on to create Blur and Britpop.