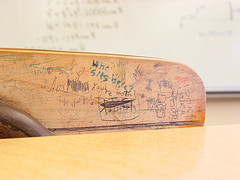 The judicial system never ceases to astonish us.

We learned this week of the tale of a South London boy of twelve who has been slapped with a rap for Grievous Bodily Harm following improper use of an elastic band during some class-time high jinx. This follows another recent episode when a Lancashire lass was fined £40 and threatened with an ASBO for crayoning a single letter on a neighbour’s wall.

Anyway, the poor little blighter was but messing about with some paper and elastic bands, as Londonist does every day on tea breaks, when one of the latter made inopportune contact with the eye of one of his chums. Said eye became a tad swollen, and even bled a little, but the accused took the right course of action – helping the injured party bathe his eye before telling a teacher – and no long term damage was sustained. There should perhaps have been some line-writing – 100 times “I will not flick or ping inappropriately” – or even a wee detention for all the boys involved in the flicking session. And that should have been an end to the matter.

But no: for some deranged reason (undoubtedly fuelled by the drone of the djinns of the ‘injured in an accident not your fault’ industry), the parents of the injured boy decided to press charges. Incredibly some utterly stupid plonker at the relevant police station detained the nipper for four hours, worked it into a dossier, and triggered three months of it being trailed through the courts. All at a cost of £10,000.00 to the tax payer. The boy has since needed counselling and has changed schools.

Words fail us. Well, actually they don’t as we have managed to write this article, but you get the drift.

Several things spring to mind. One is the fact that there are an awful lot of menacing and misguided young people out there who do need controlling, and yet who remain untouched by the ‘system’. Does the system only work for those who present no challenge to it? Is that what we should educe?

Secondly, what on earth are we breeding instead of kids these days? If kids must needs be kept in cotton wool, and can’t get a bit roughed up, or take a biff on the chin, without this ghastly OTT reaction from parents, we will soon have a generation of namby-pambies on our hands.

Finally, whatever happened to common sense? Has it run off with common decency. Don’t see a lot of either around these days.