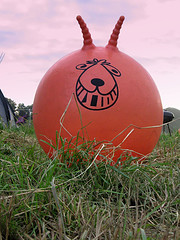 Face it, with the RMT tube strike, you're not getting anywhere on the underground this week. Unless you're going from somewhere like Camden to Canary Wharf and all of your lines are fine. In which case we're all a bit annoyed with you anyway so it's best to keep quiet about that.

So what are you going to do? Well, there are loads of other ways to get across London. Hundreds. We know that lots of people are having trouble getting from Oxford Street to Mile End. It's taking about two hours at the moment, instead of the usual half an hour. It's about a 5 1/2 mile journey.

So, how do you want to travel? Take your pick from the alternative forms of transport we'll be taking:

Horseback: That's right, Black Beauty can be pretty quick on her feet sometimes. The average horse can run at around 30mph. So we reckon, on horseback, you'll get home in about eleven minutes. Remember to take some sugar lumps.

Walking: Gasp! People walking in London? Yes, it does happen. Yahoo! Answers reckons we walk at 3mph. Pretty speedy. And this means you'll get home in just under two hours. Probably two if you're wearing heels. You won't save any time, but think of all the lovely things you'll see on the way.

Greyhound: Yes, we know it sounds silly, but think about it. Greyhounds can run really really fast. All you need to do is put one on a lead and watch it tear down Oxford Street. With you attached. Look at you go! Greyhounds travel at around 45mph. That is some very fast travelling. Around 7 minutes.

Heely's: Not just for kids anymore, adults can get them too! Wheeeeeeeeeeeeeee! This Londonista is likely to fall and break her ankle, but for those of you who are more steady on their feet, we reckon they'll go around twice the speed of normal walking. So you'd get home in 55 minutes. And be the envy of all your friends. Or the laughing stock.

Llama trekking: Now, we'll admit, there aren't many llamas walking around the streets of London. But if there were, you could get home in around 15 minutes. They're pretty good at carrying stuff so you could even take your shopping with you. Very handy.

Very own hoverboard: Yes, we know. As wonderful as Back to the Future was, they were a little bit out with the timing. We don't have hoverboards yet. (Though wasn't it fun thinking that would happen when you were a kid?) If we did, we reckon they'd go at around 80mph. So you'd be tucked up in front of the telly with a cuppa in just four minutes.

See, now with all of these other ways to get home, why not show RMT exactly what we think of their action. We don't need the underground. We've got our very own Llama. Or, at least a very active imagination.

Flickr images of our favourite mode of transport from g-hat's photostream.