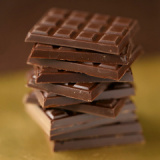 We're a little fed up of worthy awareness-raising 'days'. National Tuberous Sclerosis Awareness Week might be really important, but it doesn't really turn us on. National Ammo Day in the US sounds particularly unsavoury too - not just for the subject matter, but also, for some reason, because of the abbreviation.

Over here, however, the rather wondrous Chocolate Week 2007 is almost upon us! Woo-hoo! Our excitement has been uncontainable. In fact, the only way to calm down was by snaffling a whole box of 24 Cadbury Chocolate Fingers. Yes, OK, so Choc Week might be much less worthy than a week dedicated to combatting some cripplingly awful disease. But it gets serious brownie points through being more likely to involve, er, brownies.

As Homer Simpson might say, "Mmmmmmm". Or he would do if he were here in the UK for chocolate week, and wasn't a fictional cartoon character. Anyway, you can tell the sugar-hit has gone to our head as we're rambling, sorry...

Chocolate week starts on 15th October and aims to boost the profits of those shops and stores taking part, including La Maison du Chocolat, Harrods and Waitrose. We're more than happy to oblige by taking part in what the organisers claim will be "the biggest, most indulgent, chocolate celebration the UK has ever enjoyed" with talks and demonstrations (yawn), fountains and scupltures (fab - as long as we get to sample) and tastings (THERE'S the daddy).

The week is a national event, but there are some key london highlights, such as uber-choc desserts at Acorn House restaurant, chocolatier speed-tasting at John Lewis and other choc-shenanigans at Kew Gardens and the Natural History Museum. Full details at www.chocolate-week.co.uk.