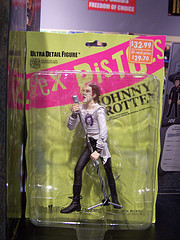 Anarchists, nihilists, thorns in the establishment's side, punks, poets, property developers, reality tv stars, radio show hosts; if nothing else the Sex Pistols are a contrary bunch. So whether the 30th anniversary bollocks celebration/reunion tour is a final nail in the coffin or breath of life to that ephemeral thing they call Punk attitude, only history, possibly as written by the NME, will tell. Either way their initial batch of Brixton dates sold out in 15 minutes and one further date has been added for November 12th, tickets going on sale this Friday at 9am at the rather non-1977 prices of £42 odd.

They've also added a date at the Manchester MEN Arena, 31 years after that incendiary debut at the Lesser Free Trade Hall. We're not sure how many of the punters will go on to form bands this time, and if they do whether they'll even be any good. It's hard not to question the irony of the gobbing working-class greebs who once scoffed at the dinosaurs of rock becoming one themselves. But then again, perhaps selling out is the only way left for an aging punk to cause new controversy.