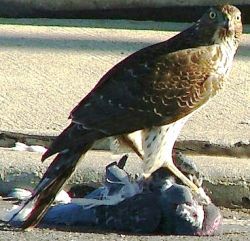 One month on from our last report on the Trafalgar Square Pigeon Wars, it appears that a new adversary has entered the fray.

For quite a while now, Ken’s assault on the flying vermin in the square has included the intimidating presence of a natural predator, namely a Harris hawk, to scare the willies out of them. Coupled with a (much-contested) set of byelaws governing the feeding of pigeons in the area, Ken has appointed a pest-control firm to fly the predator around the square in a multi-pronged assault on all-things-pigeon.

However, although the hawk’s remit has been to only ‘frighten’ the wretched birds, it seems that this aspect of its task may have been misunderstood. Like an over-zealous mobster’s heavy, the hawk has been a tad too enthusiastic in putting the frighteners on the pigeons, and actually killed quite a few of them. To be fair though, we’re not really sure how feasible it is to train a natural predator to merely ‘frighten’ its prey.

In one instance last week, the hawk got quite brazen with its ongoing bloodlust, and pounced upon a pigeon whilst it was being fed by a small child. This gory scene was described by an anonymous member of the Pigeon Action Group (the guerrilla pigeon-feeding splinter group that we featured in our last report):

It was a shocking scene. My colleague from the group was down there feeding at lunchtime. She had been handing out feed to the children. When she turned around, the hawk was behind her. It had a pigeon in its clutches. The pest control guy was trying to get the pigeon away but he was unable to. He ended up carrying the two birds to his van. A member of our group was hysterical about it and the children were screaming.

Highly charged stuff. We’re wondering how much more hysteria would have ensued if the hawk had gone after the kiddies instead. Now that would be worth seeing.

Of course, that would never happen, because the children were clearly in cahoots with the hawk, distracting the pigeons so that they could be picked off, one by one. Sinister stuff.