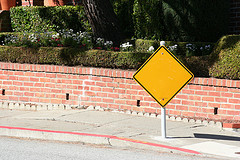 Our Lord Ken's marketing team might like to think that we all speak with ONe voice but we certainly do so in many different tongues. And whilst celebrating our cultural diversity is one of London's proud boasts, it's turning into a bit of a pain in the arse for First Great Western who don't seem to know what to do with their signage at Southall.

Firstly they remove all the signs at the station (which are in English and Punjabi) because other ethnic groups had raised concerns about using only one non-English language. Today, they're ready to put them back up having upset the council with whom they'd agreed to use the multi-lingual signs 12 years ago.

We sense a shark filled tank of hot water approaching. What to do, what to do? Well yesterday FGW said they had consulted within the community and have decided to review the signage; deciding for now to adopt government guidelines requiring only English be used. Today they accept that wider community input was necessary and unfortunately the signs were taken down before that took place and (they) apologise for that. That'll be because everyone who liked the signs originally complained more vociferously than all those who complained about them in the first place.

So who'd like to be on the FGW board juggling this hot potato of political correctness right now? Do the old signs stay because as Ealing MP Virendra Sharma says, they acknowledge Southall's distinct character and its established Punjabi community, or can we truly talk of an integrated London whilst singling one community out over any other? Can cultural diversity exist without accepting the importance of one's own language or does cultural integration mean there has to be some common ground between us all. And communication is probably a good place as any to start. Still, if there's anything our history should have taught us by now it's that there's nothing more divisive than being different.

We look forward to seeing how this one pans out and can only hope that in ten years time we'll finally be living in the post-retro-future-noir world promised by the likes of Blade Runner and Minority Report where all the signs will automatically detect our nationality and display to us correctly in a language we understand.