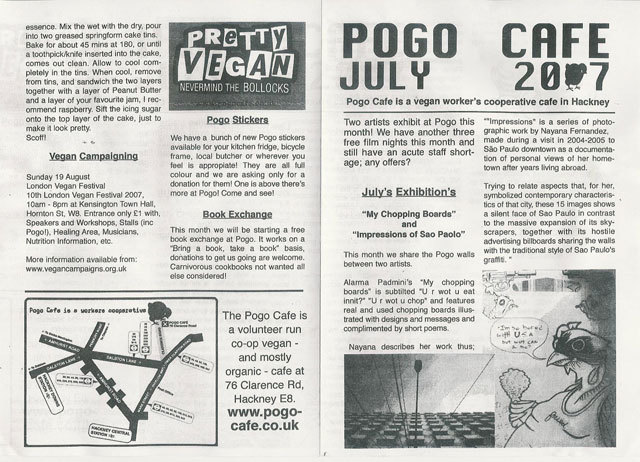 Expect to Pay: around £6

How about a review of Pogo next then? They’re not a chain and it would be interesting to see an honest review of it.

Thus commented a less than enthused reader of our “pointless” review of lunch at grilled chicken mega-chain, Nando’s. Unable to get to Pogo Café in time for our next review, we did make a note to visit Pogo if ever roaming about its East London environs.

Pogo Café is a “vegan worker’s cooperative café” in Hackney. Being a vegan worker must do wonders for one’s disposition, as the smiley and soft-spoken woman that served us was possibly the nicest person we’ve come across in a long time. She also seemed to genuinely appreciate our patronage and showed sincere interest in our thoughts about our dining experience.

The seating area, with its boot sale furnishings and social activist flyers, is mellow with a bit of an edge (think laidback punk). It’s a good place to read a book over a cup of tea; they’ve even got a book exchange. Pogo’s anti-authoritarian vision is unobtrusive (you can go there without being preached to), and its promotion of a healthy alternative to consumerism is refreshing and all too rare amid London’s increasingly corporate lunch-scape. Indeed, singular and homey Pogo exists in stark contrast to the glossy faux authenticity and buzzing lunchtime atmosphere at any and every Nando’s.

By the way, the food at Pogo is magnificent. We had a scrumptious Pogo Burger (an organic tofu patty with soya mayonnaise, tomato, and lettuce on a bun). Ordered as a main for £5.50, the burger came with salad and a side of potato wedges. For readers not familiar with vegan cookery, some of Pogo’s “made from scratch” flavours may seem unusual at first, but by the end of your meal you and your taste buds will be delighted to have broadened your culinary horizons.

Note: Pogo Café is closed on Mondays and Tuesdays.