Prom 48: Shosta 10 As You've Never Heard It Before 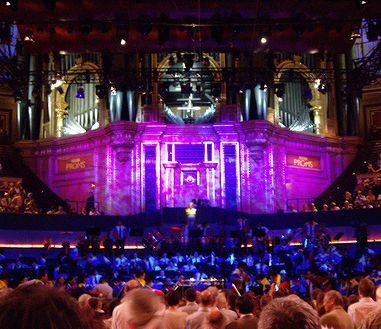 The Proms are a marvellous institution. Remarkably diverse musically, accessible, world class and - crucially - cheap as chips, they are the soundtrack to summer in London and we are privileged to have them on our doorstep.

It was with an eager step that we hied ourselves to the Royal Albert Hall on Sunday afternoon for the sold-out 48th Prom, despite the glowering sky and hint of rain in the air. Arriving at around half past four, the queue already snaked down the steps at the back of the Hall onto Prince Consort Road, well past the Royal College of Music. Undaunted, we got out our playing cards, sat on the pavement and ate cashew nuts - it pays to be prepared.

Uniformed Royal Albert Hall employees handed out tickets to ensure that queuing was a fair as well as a civilised experience, and if they were not allowed to speculate on whether we would get in to the arena or not (having had past run-ins with disappointed would-be spectators, we were told), they nonetheless offered oblique reassurance that our wait would not be in vain, much appreciated crumbs of comfort for this Londonista, who never previously Prommed ticketless, previously having experienced the vertiginous (and still reasonably priced) delights of the higher Circle tiers.

At around half past five we began to move in, watching agog as Prom ticket touts had a turf scuffle a few feet away, until we had handed over our £5 fee and were in the belly of the beast - the arena itself. Inside, the turf scuffles were less sweary but no less keenly fought, as coats, umbrellas and canvas bags became weapons in the covert struggle for a good spot for oneself and one's friends. We felt rather sorry for the RAH stewards who tried vainly to urge the crowd forward, in order that all with tickets might fit onto the floor.

Why all this effort for a concert? Well, quite apart from the programme - Shostakovich's 10th symphony, music from West Side Story and South American folk melodies arranged for a full orchestra - we simply couldn't miss the opportunity to see this particular orchestra and conductor in action. The Simón Bolívar Youth Orchestra of Venezuela has recently attracted much comment in the British press and it isn't hard to see why.

Made up of young people from the poorest slums of Venezuela whose lives would most likely otherwise be blighted by drugs, guns, prostitution and destitution, the orchestra contains the best and most talented graduates of "El Sistema", a socialised music teaching project that works from the premise that the rigour and timeless beauty of the classical canon - and the skills needed to perform it properly - can be a recipe for success for the poorest of the poor, who are provided with tuition, free instruments and a haven from the poverty and low expectations of their background.

Filing in, the players looked much like any other orchestra, in their sharp black tie, the only outward difference being the number of men sporting ponytails in the orchestra, pomaded hair shining under the colourful stage lighting. From the opening notes of the first movement of the Shostakovich, it was clear that this was going to be an outstanding evening's music - and so it turned out. Such was the beauty of the performance that sore feet and aching calves were forgotten as the music - which can be interpreted as the composer's response to Stalinism, although it transcends the narrowness and brutality of the dictator's character - washed over us. This Londonista was moved to tears during the first movement; proximity to the stage was a definite plus, as we benefited from the orchestra's full dynamic range, brought to the fore in virtuoso fashion by the conductor Gustavo Dudamel, a rising star of the scene at the sickeningly young age of 26, and a protégé of Sir Simon Rattle's. He coaxed and cajoled a wonderful performance from his players, who rose and fell in obedience to his baton, swaying back and forth, immersed in the music. We particularly enjoyed the strong leadership of the first violin, who inspired and guided his section with compelling skill. Blogger Intermezzo, who is a lot more knowledgeable about this kind of thing than us, describes the orchestra thus: "They really feel the music, physically, right down to their toes, as they play. They rocked and swayed like sailors on a stormy sea", which we agree with completely, along with the observation that they managed "a mature and complete reading that would have been astonishing from any orchestra, let alone such a young one". The Prommers around us agreed with that verdict, too, with "couldn't have been done better" one of the many glowing remarks we overheard.

After that the second half was going to have to work hard to match up. And oh, how it did.

The opening piece, music from Bernstein's West Side Story, seemed a bit lacking in depth after the Shosta but the tunes were so catchy, that was easily forgiven, and the orchestra played with pizzazz, bringing out the sinister undertones (the musical is a tragedy, after all) as well as the joyful exuberance of the score. The South American folk melodies, the final pieces of the night - or so we thought - were similarly simple on the surface but hiding depths of emotion, and performed with such outstanding skill and feeling that they engaged the entire audience. At the end of the programmed music, the applause didn't stop - nor did the foot-stamping and the whistles of appreciation, a far cry from the reserve usually associated with classical music audiences. We were then treated to no fewer than four encores - and a change of clothing, and Mexican (Venezuelan?) waves, and instrument brandishing, and drumstick-twirling, and, finally, a strip show as the orchestra's Venezuelan flag-themed tracksuit tops were flung into the audience - although one memorably got stuck on a bit of wire. It was a riotous and utterly mesmerising explosion of colour, sound, and energy, and a better end to the evening could not have been imagined. Perhaps we're just being sentimental, but the orchestra really seemed to embody the principle of solidarity, with Dudamel notably egoless, standing shoulder to shoulder with his musicians to receive the crowd's acclamation rather than directing the adulation in solitary splendour from his podium. Ejected from the arena, hands aching from clapping and cheeks from grinning, we stood in the rainy Kensington night and chatted eagerly about what we'd just seen. On a personal level, this Londonista has never been to a more enjoyable evening of classical music; the only downside to the event (apart from the blisters we got from standing up in damp shoes) was the hunch that a high-water mark has been set, and no other Proms experience will ever quite live up to this one. Ah well, we'll just have to go to a few more - and see if we can recapture the feeling. In the meantime, should you ever have the chance to see the Simón Bolívar Youth Orchestra of Venezuela in action, we urge you to seize it - you will not come away disappointed.