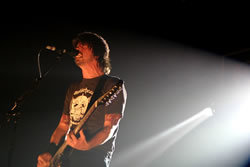 Okay, so we hold up our hands. Yesterday we completely forgot to do “Ticket Alerts”… and thus most of you will probably have your tickets when I tell you what gigs are on sale today.

Foo Fighters have announced that they’re doing a two night stint at the O2 on Saturday and Sunday 17th and 18th November. There are now only seats left for either date unfortunately, at £32.50. Though keep your eyes peeled, more nights may be added.

The Hives play Hammersmith Apollo on Friday 23rd November. Tickets are available at £16.50 each now.

Those loveable rogues The Pogues (see what I did there?) are playing their usual Christmas stint at Brixton Academy on Tuesday and Wednesday 18th and 19th December. Tickets are £29.50 each.

A head wobblingly good time will be had when David Gray plays the Roundhouse on Monday and Tuesday 12th and 13th November. Tickets are £28.50 each.

Alison Moyet plays the London Palladium on Sunday 27th January. Tickets vary in cost between £27.50 and £32.50.

The Pigeon Detectives have added another date to their string at the Forum. They now play on Wednesday 21st November, on top of Thursday and Friday. Tickets are £13 each.

Finally, if you’re up early tomorrow morning the Besnard Lakes have announced a date at KCLSU on Wednesday 12th December. Tickets go on sale at 9am tomorrow.

Photo is taken from audunn.com's flickr stream under the Creative Commons License.