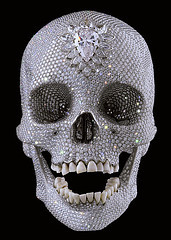 Damien Hirst's most expensive piece has been sold for £50 Million. The famous diamond encrusted skull titled 'For The Love Of God' went for the full asking price and all we know is that it was sold to an 'investment group'. Don't worry. If you were planning on snapping it up yourself but just missed the boat, they plan on selling it in a couple of years. What amazes Londonist is that they're apparently paying for it in cash. Cash. How? We have images of wheelbarrow loads of tenners being delivered to the White Cube.

So, what is it about this skull to make it so darn expensive? Well it's covered in, wait for it, a shocking 8601 diamonds (amounting to a huge 1106 carats). That's more diamonds than there is in the crown the Queen wears on formal occasions. Three times more. There's also a massive pink diamond in the middle worth £5 million alone. The real 18th Century skull was picked up in a taxidermy shop in Islington. It still has all it's own teeth. How lovely.

But, looking at it (and you can't help but), the skull is, well quite tacky. Diamonds are meant to be exclusive and one of a kind. Throwing thousands of them onto a skull isn't aesthetically pleasing for Londonist. Astonishing, yes. Pretty, no. We wouldn't want it on our mantlepiece anyway.

It seems that in this case, money can't buy you style. It can buy you a hugely expensive, amazing but rather ugly bit of bling.