By Amity Last edited 165 months ago
Amity Drew Strikes Back 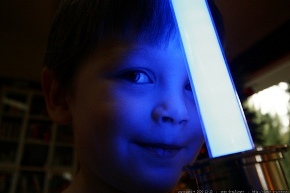 Jedi masters are best known for warding off evil forces of the Dark Side on the silver screen, but to 5-year-old Drew James of Hextable, Kent, they are warding off illness in his everyday life. Diagnosed with leukaemia in April this year, Drew’s father used the best analogy his little boy could understand and described the leukaemia as Darth Vader or Darth Maul and the necessary-but-horrendous chemotherapy treatments as the Jedi sent to destroy them.

Luckily for Drew, the Jedis are winning. He has responded well to his treatments at Great Ormond Street Hospital and was allowed to go home last month to celebrate his birthday. Residents of Hextable and friends of the family have been “so very, very generous” and are raising money to send Drew to Disneyland in Paris for a much needed reprieve from the very adult world that illnesses like these catapult kids into.

Debbie and Gordon James, Drew's parents, are relieved that his prognosis is quite good at 80% odds of survival, but are understandably shaken and worried by the entire experience. Seeing their young son go through treatments that no adult would ever want to encounter is too much for them sometimes. Debbie, who stays by Drew’s side 24 hours a day, and Gordon, who juggles working his IT job with visiting Drew in hospital as much as possible, are exhausted and say the stress has taken its toll on their relationship, but they are determined to carry on, helping their little boy slay the knights of the Dark Side once more. Drew’s final round of chemo comes in September and then fingers and toes will be crossed for a much-anticipated all clear from the doctors.

Drew, may the force be with you.

If you would like to contribute to the Disneyland fund for Drew, you can do so by donating directly to Barclays account number 63444910, sort code 202542.