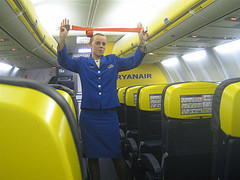 Ryanair has had a public spanking this week at the hands of the Advertising Standards Authority over the former’s bill board claims that they are bigger, better, faster, cheaper and reliabler than a certain land-lubbing train route from London to Brussels (well, they don’t actually say that they are bigger and better, but you can tell that they’re thinking it).

The cuddly blue and yellow airline reckons that its seventy minute flight will whisk you into the heart of Belgium in just 70 minutes (for around £15.00 + taxes), while Eurostar takes a whopping 131 minutes (for around £27.00 + taxes). ASA have quite rightly pointed out that as Ryanair in fact collect their passengers from Stansted, some 40km outside our fair city, and then drop them off at Charleroi, which is 46km outside the centre of Brussels, the comparison is far from fair.

Now Londonist has to admit that cheap air fares can be pretty attractive – what’s not to like about the South of France for 30p? But we’re with Eurostar all the way on this one. Especially after Ryanair’s somewhat petulant response to the judgment:

and in view of the fact that this is the second time they have been in trouble with the ASA this year. In July they had their flaps rapped over a misleading ad campaign which implied that their carbon footprint was less than it actually is.

It also has to be said that Londonist is very fond of trains – less hassle, more legroom…gracious travelling indeed. And it is nicer to the planet. Thanks to Eurostar, the modern anorak can practically travel the world without stirring from his seat. Figures show that more and more of us are letting the train take the strain.

Wethinks that Ryanair should say it’s sorry, and be a little less rash with its boasting in future. Telling porkies is not the way to shake off the competition.