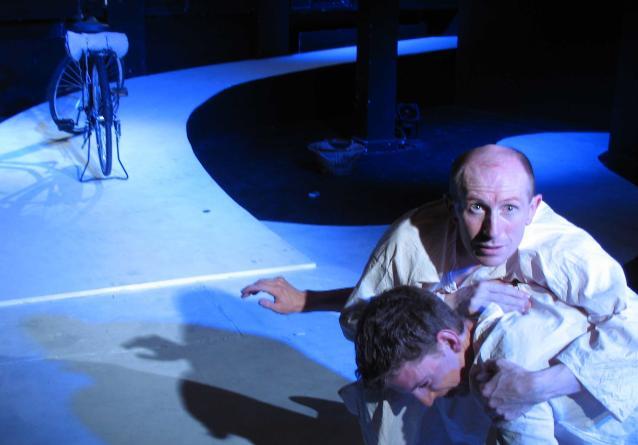 If you have ever felt that you were caught in a David Lynch film, you will know what we mean. (For the record: Londonist loves David Lynch.) Everything seems to alternate between slow motion and fast forward, but you know that can’t be right. Different people tell you different stories and they don’t make sense even though you know they should. That’s what it feels like for the main character in Bicycle, and that’s how it feels for the audience watching it.

Bicycle is written by Korea’s leading playwright Oh Tae-Suk. It is here given its UK premiere, in a production directed by Min-Jae Kang, a Korean actor and director currently residing in London. Oh Tae-Suk is perhaps best known, by an UK audience, for his 2006 production of Romeo and Juliet at the Barbican, in which Father Laurence buys his herbal drugs off one of the three witches from Macbeth. That same crossing of boundaries is apparent in Bicycle.

Yun Chin (Vincent Manna) is a town clerk, who has been absent from work for over a month, due to mysterious circumstances that even he cannot explain. In order to understand what has happened, he revisits his journey with his co-worker Ku (Bodelle de Ronde), and slowly puts the pieces together to reveal secrets of Korea’s terrifying past and a heart-breaking incident of the present.

The intimacy of the Camden People's Theatre space makes this production a truly spine-tingling experience: it is rare to be genuinely spooked in the theatre, but in Bicycle, audiences are only inches away from actors in serious distress, either shouting and screaming or bewildered and frightened. It is hard not to be affected by the proximity and intensity of the performances, enhanced by excellent lighting and sound effects.

The performances are all superb: each actor is fully committed and clearly, a lot of work has been done on pronouncing Korean names correctly and portraying Korean customs and traditions with real conviction and understanding. It is a difficult enough task to establish facts about the Korean war for an audience that is unlikely to know much about the country or its history; on top of this, the artistic choices to stage the play in a complex structure of flashback, role-play and real-time could have brought an unhappy, confusing mess to the stage.

As it is, Bicycle is complicated and challenging, requiring the audience to engage as fully as possible for nothing is simply given in this production. And applying some effort to stick with the complex structure and historical detail is worth it: Bicycle is a powerful play about ghosts and guilt, war and uneasy peace, story-telling within story-telling and the difficulties of letting the past stay in the past without forgetting it in the future. When the play ends, in a chilling cacophony of noise, the audience is moved finally to fully understand what it is all about.

By Charlotte Pedersen and Hazel Tsoi