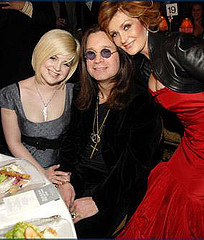 It really does seem like the Osbournes are taking over the world, doesn't it?

You can't turn on the telly without seeing Sharon on The X-Factor and America's Got Talent, Kelly on Project Catwalk or Jack on one of those extreme sports adrenaline addict shows he seems to be so fond of. Kelly's released three albums and starred in the US teen drama Life As We Know It. Jack's written an autobiography of his busy first 21 years, 21 Years Gone. Sharon's written two – Extreme in 2005 and Survivor: My Story The Next Chapter, which will be released in October this year. Oh, and of course Ozzy's released a few albums in his time and there's always The Osbournes and the autobiography written by the whole family, Ordinary People: Our Story.

What's next for this busy family? Well, the next step to world domination is clearly the West End. Kelly will join the cast of Chicago at the Cambridge Theatre on 10 September for a seven week run. She'll play the role of Mama Morton, although at 22, she seems a bit young to be a corrupt and threatening prison matron.

At this rate, we fully expect to see The Osbournes: The Musical! , starring the whole family, playing in the West End by next year at the latest. And if we're honest, we'd have to admit that we'd buy tickets for that.

Chicago is currently playing at the Cambridge Theatre, Seven Dials, London, WC2H. Tickets are £20-£55 and can be purchased by calling 0870 8901 102. Kelly Osbourne will be appearing for seven weeks from 10 September.