Tube On The Rocks 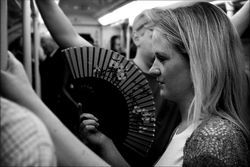 In 2003, at the height of a summer of insufferably hot tube travel, Ken and TfL launched a competition “Cooling the tube” to try and draw out a brilliant, original, workable and economic solution to the annual Big Sweat. £100k was up for grabs.

News today, though, that TfL are getting ready to trial the whizzy idea of putting blocks of ice under passenger seats to cool things down makes us wonder if they actually just weasled out of the compo to keep hold of the cash because surely SOMEONE out of the 3,400 entries suggested such a blindingly simple/seemingly stupid idea?

Either way, trials will kick off next year with engineers taking into account the melting effect of hot arses and the obvious hazard of pooling water in an electric train. But bear in mind, as Ken reminds us, any cooling scheme “will take years, not months, to deliver results."

Meanwhile, this summer’s efforts involve testing the use of cold water from an underground river at Victoria Station to cool tube air and bringing back into use "a large number of station ventilation fans which had previously been allowed to fall into disrepair."

And, of course, the highly useful public information campaign continues. Repeat after me: Carry water. Don’t get on a train if you feel unwell. Avoid pulling the passenger alarm between stations. Walk. Stay at home. Sit on an ice cube.

Image courtesy of pfig in the Londonist Flickr Pool