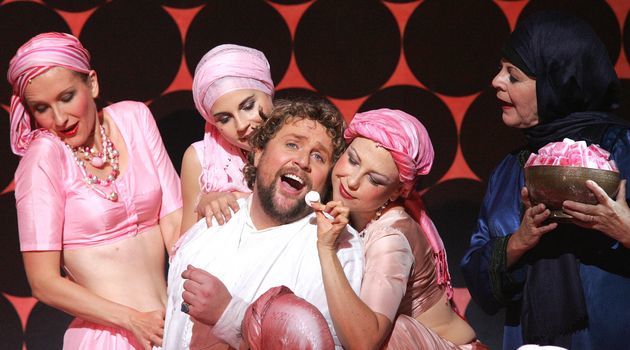 The English National Opera are closing their season with what's advertised as a 'lavish new production of the legendary Broadway musical', Kismet.

This strange, hybrid stage musical (heavy Russian score mixes with a book filled with light Edwardian exotic melodrama, harems, beggars and murderers from 1071 AD mixing with 1950s lyrics) hasn't been performed on the West End stage for nearly 30 years. With its setting in Baghdad, and an entire song dedicated to the virtues of the supposedly gaudy city of dancing girls, magicians and bazaars, it seems the show may be suffering the same signs of ageing as most members of the press-night audience.

The lovely Michael Ball (Les Misérables, Chitty Chitty Bang Bang, Aspects of Love) leads the cast with style and pizzazz. His poet, Hajj, behaves like the bastard child of Scheherazade and Aladdin - at times pure panto, at others, a philosophical story-spinner. Each time he comes on set, the mood lightens; when he starts to sing, it's the theatrical equivalent of a big sofa, a cup of tea and the first bite of your mum's best cake. Sweet, comforting, recognisable, homely perfection. That man's got a voice.

He's easily matched by the brilliant Sarah Tynan, playing his daughter, Marsinah. Her truly gorgeous soprano competes well with the three leading men (Ball, Graeme Danby and Alfie Boe) in 'And this is my beloved.' In fact, as far as the vocals are concerned, this production is a hit, but that's what we should expect from the ENO.

Indeed, if you're putting on a musical and charging £80 a go, expectations will be high. Unfortunately, despite excellent vocal performances, this show just isn't quite good enough to justify that kind of money.

Lacklustre choreography (apparently, the choreographer, Javier De Frutos, left the production last month due to 'creative differences' - surprising, because it doesn't look like he was that creative in the first place, let alone suffering from some kind of conflict about it), dodgy burqas, unconvincing harems, uncoordinated dancing girls and marching from the boys, and an almost complete lack of on-stage chemistry between characters (with the exception of Ball and the Broadway star, Faith Prince as the lascivious Lalume) aren't what you expect from a top class West End show.

It's a shame, but from within Ultz's quirky, striking sets, even after the ‘Strangers in Paradise’ had fallen in love, they still seemed more like strangers than lovers.

However, if you like this kind of thing (big musical numbers, big life questions in song, big sets, Michael Ball – happy 45th birthday for yesterday, by the way), chances are you’ll leave the Coliseum contented. Even if your wallet is a lot lighter.