Nobody would have guessed that Stephen Tyler is a mere 59 years old judging by his performance at last night’s Hyde Park Calling finale with Aerosmith headlining a day of stellar bands. Strutting around the stage like only he can, Tyler had the audience in the palm of his hand from the opener “Love in an Elevator”.

Whilst Aerosmith undoubtedly stole the show, Hyde Park Calling was a three stage festival which showcases the best in current rock. London band Haunts played the packed out third stage, slowly warming up the crowds with their unique brand of danceable rock, akin to a lighter Biffy Clyro. Closing with “Live Fast, Die Young” they had everyone moving, and are surely ones to watch in the future for those with heavier tastes.

After them Brigade managed to entertain sufficiently the sizeable crowd on the third stage with their Placebo / Muse / Oceansize / My Vitriol style mixture of rock. Over on the main stage The Answer put in a performance of their lives, playing to their biggest audience yet and winning over a sizeable part, with massive “Answer” branded balloons bouncing along the audience. Fans of Led Zeppelin, Free or The Who should make sure they catch them – as they themselves said “We may be Irish, but we love London, so we’re around a lot”. 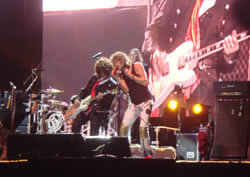 Jet were next on the main stage, putting in a decidedly average performance – their (few) hits sounded tired and jaded, and new material never goes down well at festivals. During Jet’s set the heavens opened, soaking everyone, leading to chants of “Get your brolly down” (and alternatives) from people further back when former Audioslave star Chris Cornell came on for his second-on-the-bill slot. Unafraid of the rain, he commented how it was just like being at home for him. Highlight of his varied set which mixed both his own solo material and Audioslave material was probably his most recent song, “You Know My Name”, title song for the recent Bond film.

Finally the stars arrived, 15 minutes late, and bounded through a greatest hits set that highlighted their long and varied career. “I don’t want to miss a thing” was thrown in early, much to the appreciation of the crowd, drowning out Steven Tyler. Prancing around the stage like he has done for the last 30 years, they really were not showing their age other than their short “Deckchair set” which saw Tyler and guitarist Joe Perry at the end of the catwalk sat in (some rather comfy looking) deckchairs.

Climaxing with a fantastic performance of “Walk This Way” with Run DMC (yes, THE Run DMC), Aerosmith were gone from London for another few years. Past their prime? Unlikely – they’re just as good as they have ever been.